Scouts launch balloon to the edge of space

To the Edge of Space

It was a case of to infinity and beyond for 1st Hartford Scouts after they launched a balloon to the edge of space.

As part of their mission to earn their Astronautics badge, members of the Scout group gathered excitedly at Hartford Scout Hut to see their projects head towards the heavens.

They were able to monitor the balloon’s progress on TV screens in the mess tent and the Scout Hut as it embarked on its journey thanks to data produced by sensors and cameras attached to the balloon.

And experts were on hand from European Astrotech Ltd who kindly provided the launch free of charge and who had worked closely with the Scouts for several weeks, to explain what was happening and to answer any questions.

The whole purpose of the experiment was to discover the impact of the altitude on certain items, and to give the Scouts a taste of what a future career in the space industry would be like.

With the balloon went a cuddly kangaroo to see the effects of temperature and pressure, a pig’s eyeball to see what happens in the near-vacuum of space, a piece of pigskin to check the effects of radiation and the altitude’s impact on fluids including water, blood, urine, and oil/vinegar.

The balloon reached the upper limits of Earth’s atmosphere, before travelling easterly over the Pennines to Nottinghamshire and reaching a height of 27.5km.

At this point, the balloon burst, the items landed in a lake and were recovered by an angler in Gunthorpe near Nottingham.

As well as the balloon launch, scouts received talks from a wide variety of high-profile space organisations and enjoyed activities including a virtual reality Mars base and rocket building.

Speaking about the experiments, Scout Leader Ian Johnson said: “This has been an amazing opportunity for the Hartford Scouts to learn about space and why we send people there.

“We hope that all involved had fun achieving their Astronautics badge and gained an insight into the amazing opportunities happening now in the space sector.”

The Astronautics badge is sponsored by the UK Space Agency, and the events were organised by former 1st Hartford Scouts Ray Stott and Ian Johnson (current Scout Leader)

Ray Stott (SpaceSpecialists) and Scout leader Ian Johnson were Scouts together 40 years ago at 1st Hartford.

As the third part of their Astronautics badge, 1st Hartford Scouts are launching experiments on a balloon to the edge of space. The Scouts have chosen several experiments to fly on Saturday 30th November 2019 from the playing fields next to the scout hut. Launch window between 10am and 12am.  The village was busy with the Christmas fair, so it was a suitably cosmic start to the day!

The balloon was packed with sensors and GoPro cameras, so the Scouts can closely monitor the experiments, which include:

Preparations inside the Scout Hall

And of course, a 1st Hartford Scouts neckerchief with badges.

These experiments will help the Scouts understand the effects of a near-vacuum and low-temperature environment on the human body. The environment at this altitude is very similar to the conditions on the surface of Mars. 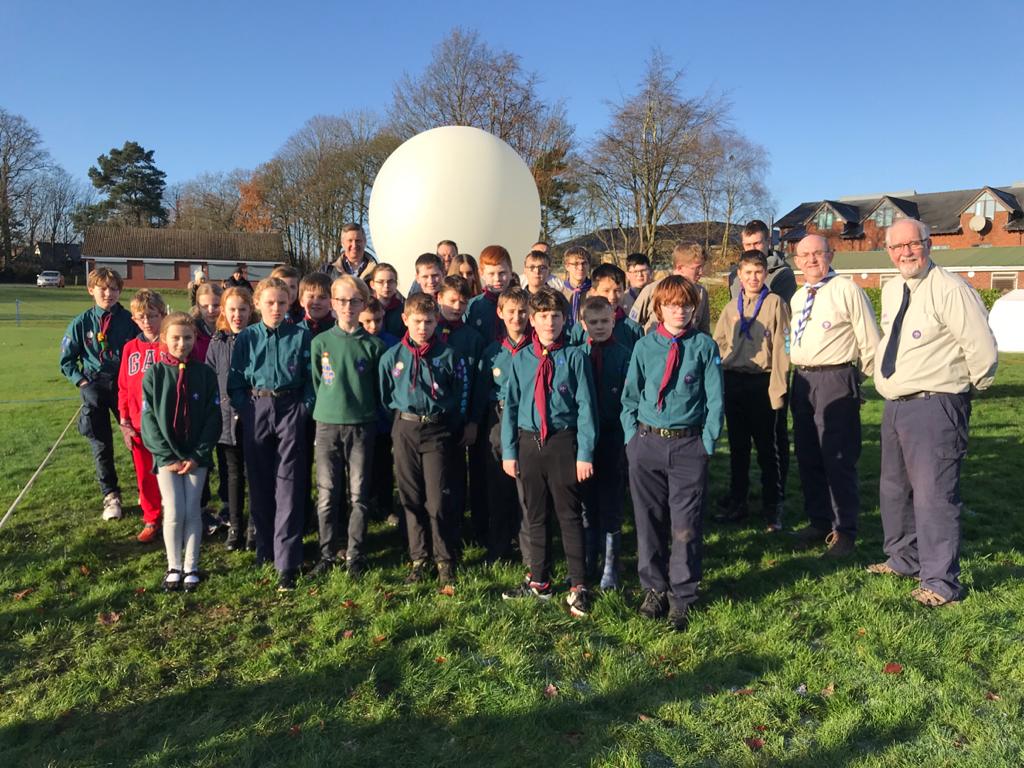 The balloon launch was successful and the experiments travelled initially westward, then easterly going over the scout hut again and then over the Pennines to Nottinghamshire eventually reached a height of 27.5 km at which the point the balloon burst and the experiments splash landed on a lake and were recovered by an angler from the Ashfield Angling Club, Gunthorpe, Nottinghamshire.

Tracking the experiments as they cross the Pennines flying eastward!

Go-Pro Footage of the Scouts experiments

Tracking and flight path - we got to 37.5 km before the balloon burst!

Splashdown on a lake in Gunthorpe, Nottinghamshire!

The project could not have gone ahead without the help of the following:

The Scouts would like to thank European Astrotech Ltd (EAL), Westcott, Oxfordshire who facilitated the balloon launch free of charge!